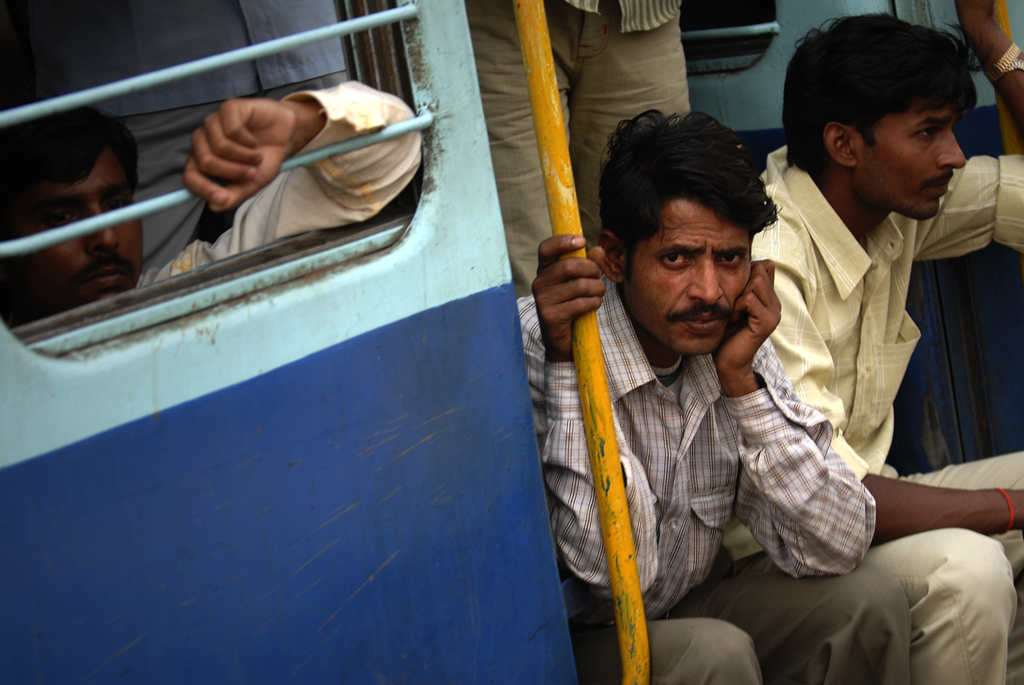 In India, of course, culture and tradition play an important role, and at the stopovers of the special trains that are available for the special rail travel in India, they can be felt and experienced first-hand. Rail travel in India can lead both to the beautiful beach regions, as well as to the gigantic high mountain regions of the Himalayas. It is certainly an unforgettable and very special holiday experience to be able to admire the highest mountains in the world. In addition to the ancient culture in India, train travel in India also represents journeys in the footsteps of a long and turbulent history.

One of the most beautiful travel options in India is train travel as the photographer Kristian Bertel is portraying in this story. The Indian railway network is the second largest in the world and the best way to experience the country up close. Every day, more than 7,800 trains run on a distance of approximately 63,000 kilometers.

Train travel through India
Driving a train and India just belong together. The diverse landscape in India can be wonderfully explored on rail travel. Breathtaking mountain regions of the Himalayas are also part of train travel in India, as well as beautiful beach areas and the millennia-old culture. Train travel in and through India are definitely a very special holiday attraction, which is also associated with a lot of nostalgia. The lush, tropical vegetation, admiring an enormous diversity of flora and fauna on rail travel, is certainly an unforgettable holiday experience. The subcontinent of India has so much to offer that just traveling by train will allow travelers to experience as much of this fascinating country as possible. You can choose between the luxury trains, the super fast Rajdhani and Shatabdi Express or one of the many regular trains. Special trains are the "Toy Trains", which drive in some mountain regions, the best known is the Toy Train in Darjeeling. We are happy to introduce you to some of the world famous luxury trains. Let yourself be seduced by an unusual journey and enjoy the unique ambience aboard a Palace on Wheels, Deccan Odyssey, The Golden Chariot or the new special train that will take you from Mumbai to the Taj Mahal. For special requests on the itineraries by train through India, we are happy to help and help you plan the most individual train travel in India. 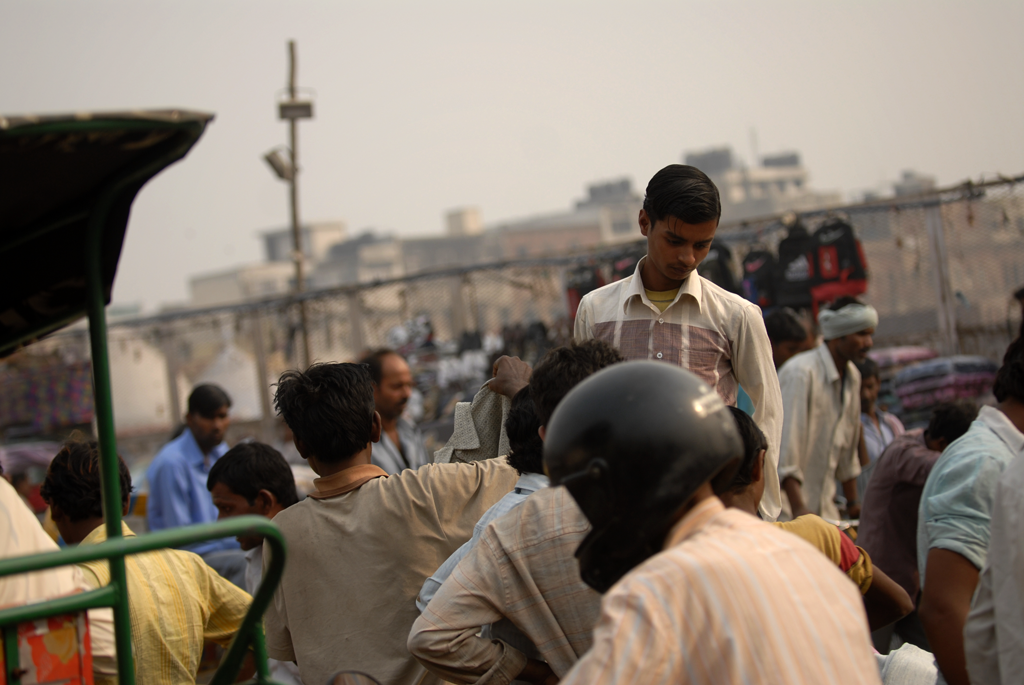 Indian Railways is one of the busiest networks in the world, transporting 8.107 billion passengers and over 1.108 billion tonnes of freight annually. The Indian Railways runs a number of special types of services which are given higher priority. The Rajdhani trains introduced in 1969 provides connectivity between the national capital, Delhi and capitals of the states.

Railway stations in India
A railway station serves as an area where passengers can board and alight from trains. A goods station is a yard which is exclusively used for loading and unloading cargo. Large passenger stations have at least one building providing conveniences for passengers, such as purchasing tickets and food. Smaller stations typically only consist of a platform. Early stations were sometimes built with both passenger and goods facilities. Platforms are used to allow easy access to the trains, and are connected to each other via underpasses, footbridges and level crossings. Some large stations are built as culs-de-sac, with trains only operating out from one direction. Smaller stations normally serve local residential areas, and may have connection to feeder bus services. Large stations, in particular central stations, serve as the main public transport hub for the city and have transfer available between rail services, and to rapid transit, tram or bus services. 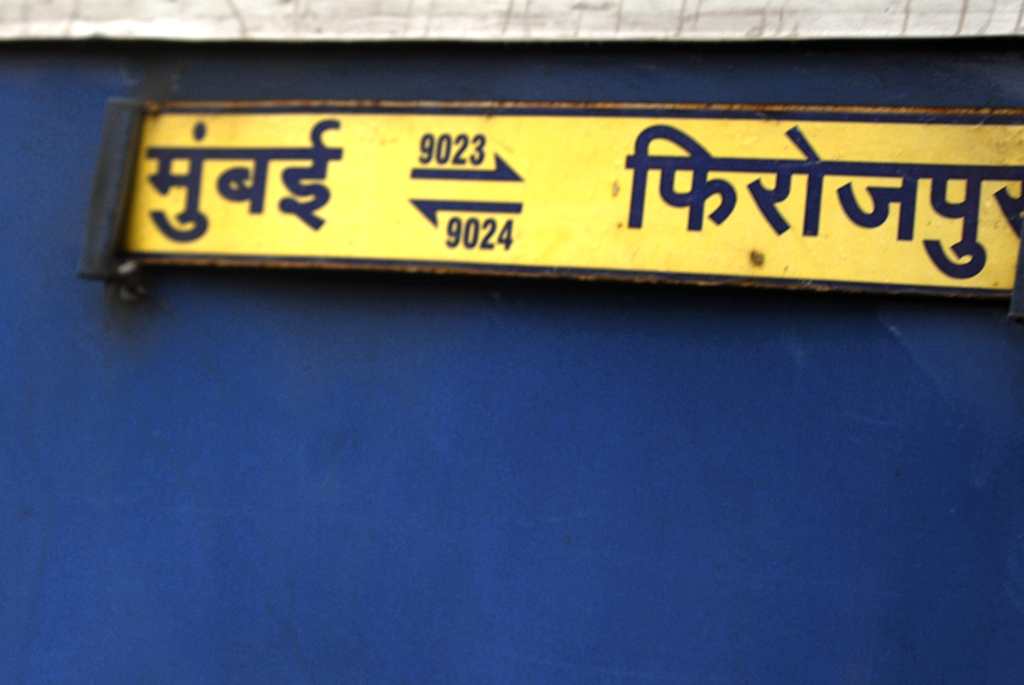 Nearly all trains in India are operated by the government-run Indian Railways. Railways are the most widely used mode of long distance traveling in India. India boasts of one of the biggest network of railway lines in the world. The rail system is very efficient, if not always on schedule.

Discover the Indian landscape and scenic beauty
Traveling on Indian Railways gives you the opportunity to discover the Indian landscape and scenic beauty first hand and is generally more economical than flying domestic. It is one of the safest ways of travel in India. With classes ranging from luxurious to regular, it's the best way to get to know the country and its people. Most train passengers will be curious about you and happy to pass the time with a chat. Traveling on a train or strolling through an Indian railway station while waiting for your train, is in itself an important part of discovering India. If you are on a budget, traveling on an overnight sleeper train will reduce a night's stay at a hotel. Traveling on trains in India is highly recommended. The 'Rajdhani' and 'Shatabdi' trains are the most luxurious trains on Indian Railways and are completely air-conditioned and also have breakfast, lunch, evening tea and dinner included in your ticket price and the food is served at your seat during travel. Most of these trains also have modern German designed LHB coaches which are extremely comfortable and luxurious. These trains are also faster than any other train in Indian Railways. The 'Rajdhani' Express trains are fast long distance overnight that connect regional state capitals to the national capital New Delhi. The 'Shatabdi' Express trains are fast short distance daytime intercity trains that connect important cities in a region, for instance two adjacent states' capitals. The 'Duronto' Express trains are fast long-distance "point to point" non stop trains that directly connect, without stopping, two important cities located far apart. These trains have no commercial halts on their way but only operational halts for maintainence and crew changes.

Although the history of luxury train traveling in India dates back to the time of maharajas during the days of British Raj, the modern history of this mode of transportation dates back to 1982 with the introduction of India's first luxury train Palace on Wheels. Palace on Wheels was introduced as a joint venture of the Rajasthan Tourism Development Corporation and Indian Railways to promote Rajasthan as a global tourist destination. The venture turned out to be a great success among overseas travelers and a few decades later more such train journeys followed. At present there are five trains offering twelve signature journeys across major tourist destinations in India. Operated jointly by Indian Railways and respective state tourism departments, luxury trains in India offer a wonderful way to experience the sights in India without having to worry about the hassles of travel and accommodation. Journeys on board these trains are all inclusive of accommodation, dining, sightseeing, transportation and porter charges. Each of these luxury trains are equipped with state of the art amenities such as live television, individual climate control, restaurant, bar, lounges and cabins with electronic safe and attached bathrooms. 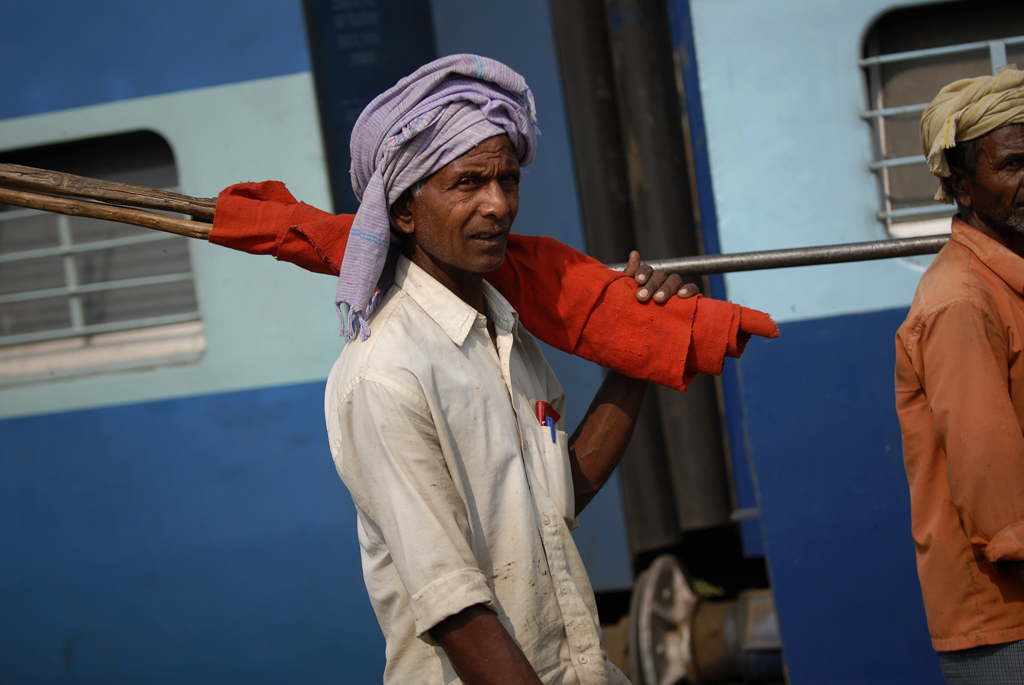 Indian Railways is the third largest rail network in the world and the rail system is efficient, if not always on schedule. Tracks running well over 60,000 kilometers help connect about 7500 stations, ferrying nearly 20 million people every day. Although distances in India are long and Indian trains are not the world's best, traveling in them can add a fascinating new dimension to a visitor's experience. There is virtually no better way to make friends with the local people and see the spectacular and diverse Indian countryside. On many routes the railways are the fastest and cheapest way to get around.

Pilgrimage and business
On the other hand, Shatabdi Express provides connectivity between centres of tourism, pilgrimage or business. The Shatabdi Express trains run over short to medium distances and do not have sleepers while the Rajdhani Expresses run over longer distances and have only sleeping accommodation. Both series of trains and rail travel. A terminal or terminus is a station at the end of a railway line. Trains arriving there have to end their journeys or reverse out of the station. Depending on the layout of the station, this usually permits travelers to reach all the platforms without the need to cross any tracks – the public entrance to the station and the main reception facilities being at the far end of the platforms. Sometimes, however, the track continues for a short distance beyond the station, and terminating trains continue forwards after depositing their passengers, before either proceeding to sidings or reversing to the station to pick up departing passengers. 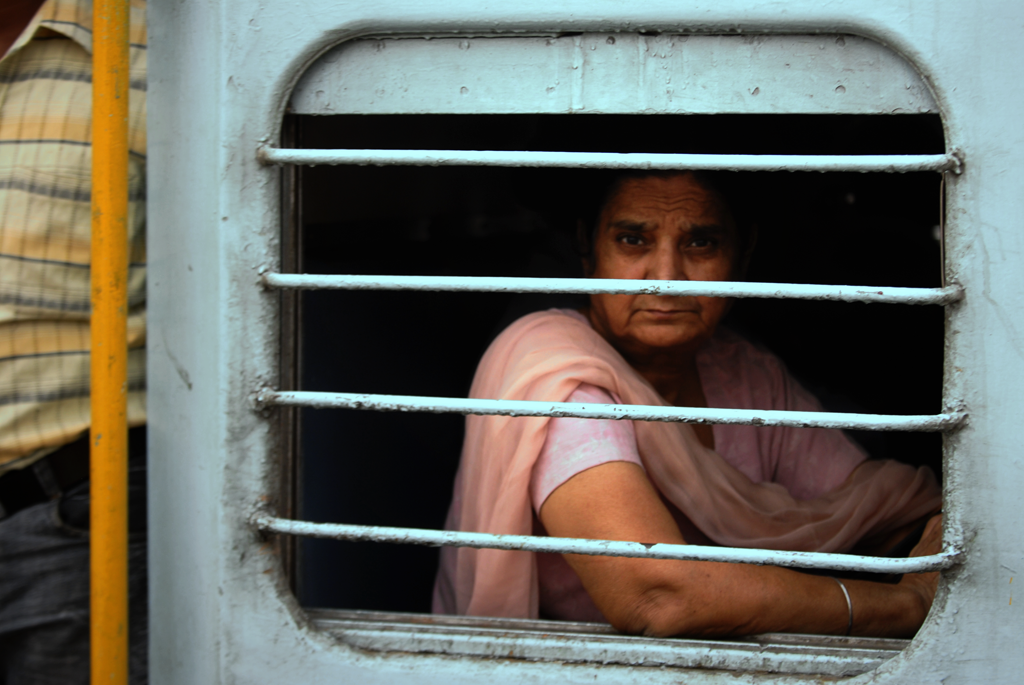 Hot food is available at mealtimes on almost every train in India. The food is mostly prepared in kitchens at railway stations and then loaded onto the train, either onto a pantry carriage attached to the train on most important trains, or just brought on board by waiters and distributed directly to passengers. In most cases, a waiter collects orders an hour or two before mealtimes and if you do not place an order, you may be left out in the cold. 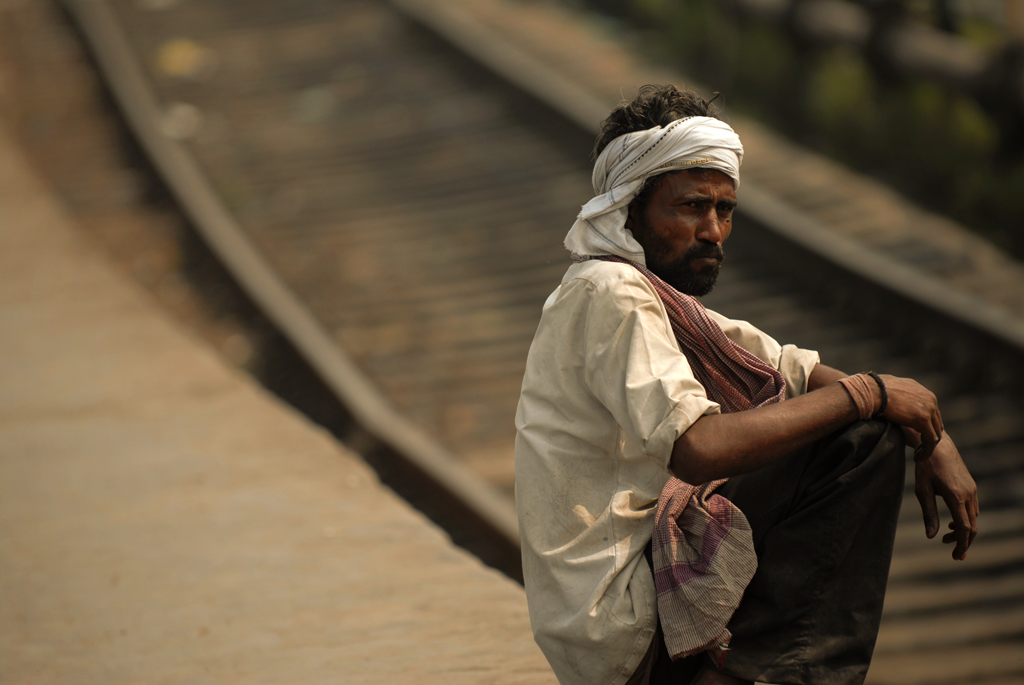 Portrait photography or portraiture in photography is a photograph of a person or group of people that captures the personality of the subject by using effective lighting, backdrops and poses. And for the phtographer there are many different techniques for portrait photography. Often it is desirable to capture the subject's eyes and face in sharp focus while allowing other less important elements to be rendered in a soft focus. At other times, portraits of individual features might be the focus of a composition such as the hand as with this Indian man who is waiting for the train in Delhi, India.

Portraits from India told in stories
A passenger train is one which includes passenger-carrying vehicles which can often be very long and fast. It may be a self-powered multiple unit or railcar, or else a combination of one or more locomotives and one or more unpowered trailers known as coaches, cars or carriages. Passenger trains travel between stations or depots, at which passengers may board and disembark. In most cases, passenger trains operate on a fixed schedule and have superior track occupancy rights over freight trains. Unlike freight trains, passenger trains must supply head-end power to each coach for lighting and heating, among other purposes. This can be drawn directly from the locomotive's prime mover modified for the purpose, or from a separate diesel generator in the locomotive. For passenger service on remote routes where a head-end-equipped locomotive may not always be available, a separate generator van may be used. The photographer is avalable for photo assignments in India. For further information:
Contact the photographer

Posted by PHOTO ESSAY: Dispatches | India in Portraits and Stories ...